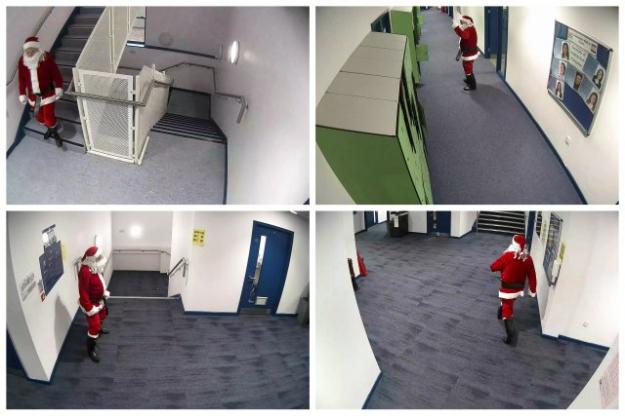 There have been reports of an unexpected presence at St. Julie’s this week. In a red suit!

Eyewitness accounts describe the visitor as being of average height, stout build with significant facial hair. CCTV footage indicates he was clad predominantly in red, wearing spectacles, a hat and white gloves.

Some members of the school community challenged him as to why he was in the building and he gave varying responses. To one he indicated that he may be a gamekeeper as he said he was looking for two of his pets, Donner and Blitzen. When asked what they looked like he cryptically responded as a meteorologist, saying simply "rain, dear." To another he indicated that he was conducting a behavioural audit to see if staff and students were being ‘naughty or nice’. Masquerading as a horticulturalist, to a third he said simply "Ho, ho, ho!"

Whatever the purpose of his visit, he seemed a cheerful soul who brought smiles to many faces! Staff and students are urged to be on the alert for the sounds of sleighbells and if encountering the mysterious figure, be sure to wish a 'Merry Christmas'!