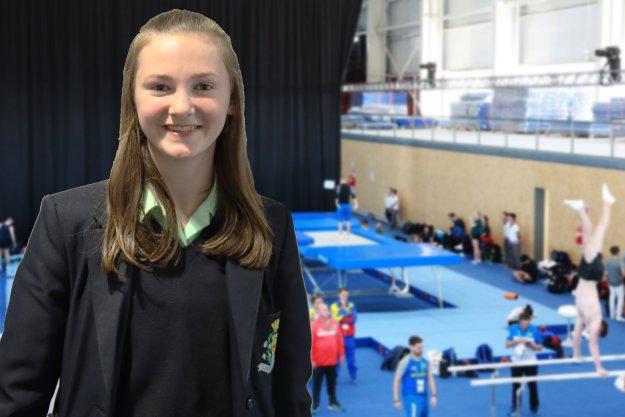 Congratulations to Amy in Year 9 for a fantastic performance at the Spring Series national trampolining competition recently held at Telford International Centre.

In a story that's all too familiar to top level athletes, Amy was recovering from a back injury at the time of the competition, reduced this year from two events to just one due to pandemic restrictions. This forced her to perform a simplified routine, but her outstanding execution of it still saw her earn a hard-won fifth place in the national 13-14 age group.

Amy is a member of the City of Liverpool Trampoline Academy, where she works with her coach, Jay Scouler.

Although she has been bouncing for five years now, Amy speaks refreshingly candidly about her introduction to the sport: "I hated it at first! I really, really wanted to be a gymnast but the gymnastics club told me that I wasn't good enough. I was devastated."

Fortunately, a trampoline club that Amy's sister was a member of operated in the same venue, and the coach invited Amy to have a bounce to cheer her up. It took a lot of persuasion but Amy's natural aptitude was instantly recognised and she was encouraged to join the trampolining club. Her skills, and her love of the sport, grew in time as she worked her way up to international competition standard.

We're hugely proud of Amy's achievements and we'll continue to watch her career with great interest!