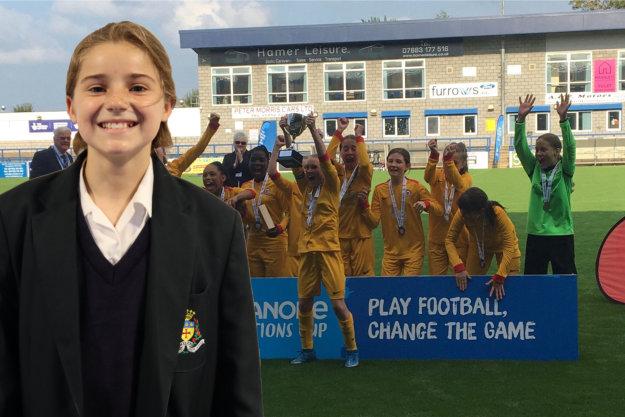 Every September, as we welcome our newest students into Year 7, we look forward to discovering and developing their talents. This year we've had one student's talents revealed to us as she lifted the National Schoolgirls' Under 11 FA Cup trophy!

Yasmin started her competitive footballing with FC Start, playing alongside boys. She then joined the Woolton Hurricanes, a local Girls' team, where the 20-21 season brought an almost unbeaten run in the league, and she has recently transferred to Liverpool Feds.

It was in 2020 that Yasmin applied for a trial for Liverpool Schoolgirls where she was selected to represent the city. The team progressed through the U11 FA Cup knockout tournament all the way to the final in Telford playing against the U11 Woking Schoolgirls.

The final had a tense start, with Woking taking the lead before an equaliser five minutes later. Yasmin, playing as a right sided midfielder demonstrated her versatility by making a tactical switch to the left side during the second half of the match. With some inspired play, Yasmin assisted the team to their ultimate and decisive 4-2 victory!

Although Yasmin is very modest about her fantastic achievment, she did say that the experience of playing in the final was "Really good fun! We brought loads of really noisy fans with drums!"

We're confident that she will carry forward this pleasure and enthusiasm in her sport as she prepares for trials  for Liverpool Schoolgirls in this season's brand new U12 squad. Good luck Yasmin!