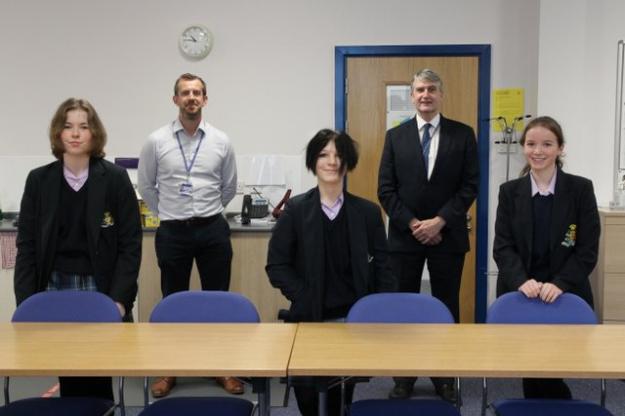 A team of Year 10 students have scooped first prize in a sustainability competition and scooped the £5,000 prize to help implement their ideas!

The construction company Overbury are currently working on two very large-scale projects in Liverpool city centre; The Royal College of Physicians on Edge Lane and the new HMRC Regional Office at India Buildings on Water Street.

Their Environmental and Sustainability Manager organised an interschool Dragon's Den style competition based on sustainability, as climate change is probably the biggest issue facing our young generation, with a first prize of £5,000 that would go towards putting the carbon saving measure into practice.

After completing an environmental audit of St Julie's, our Year 10 girls came up with several ideas from which the school could improve their environmental profile and reduce our carbon footprints.  Their findings indicated that the greatest gains could be made by the sale and use of plastic water bottles in the Dining Room.

It was evident that the easiest way to reduce our carbon footprint and plastic waste was to reduce the issue at source.  Katie had the idea of having reusable water bottles and water fountains that showed the number of plastic bottles saved.

On investigating, the girls discovered that current annual use equated to the same CO2 emissions of driving a car around the world four times.  Over the five period a pupil would be in school, a car could almost drive to the moon and back.

From the Dragon's Den pitch to a panel of sustainability, architectural and engineering experts, the girls also showed that the £5,000 prize would cover the cost of 5 new water fountains.  The panel were 'blown away' by the size of carbon savings that could be achieved based on current usage.

Up against teams of Year 12 pupils from other schools, it was from this pitch that our students were awarded the first prize! Our students were praised on their articulation of their argument.

Congratulations and well done on this outstanding achievement to Ava, Katie and Vlada.