Admissions for 2020 are submitted electronically through the Liverpool City Council website.

Additional information, including the St. Julie's Application Form, can be found using the links in the menu above.

In the interim, you might like to encourage your daughter to explore the ‘Welcome to your new school’ section of our website which will help her to feel ready to join us!

For reference with respect to 2018 admissions, the previous admissions arrangements can be found here. 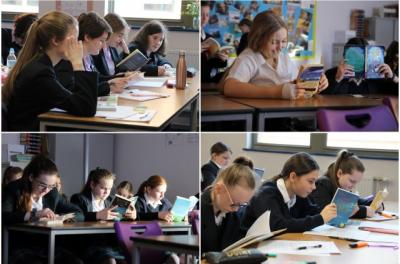 To mark World Book Day on Thursday 5th March, students and staff across the school took part in the Liverpool Readathon! This is a city-wide initiative encouraging everyone in schools to Drop Everything and Read (DEAR time).

At 10am, Ciara and Keira in Year 10 announced on the tannoy system that it was time for the Readathon: "Drop what you're doing, pick up a book and enjoy the next ten minutes discovering a new world."

And that is what we did! Students across all subjects dropped what they were doing and picked up a book - and staff were involved too. Check out the photos to see what we were reading! 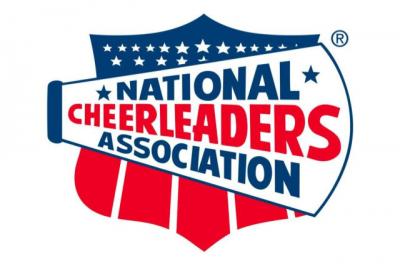 Congratulations to Michaela in Year 10 who joined her cheerleading team in competition at the NCA All-Star Nationals in the USA!

The All-Star Nationals event took place in Dallas, Texas, and is the National Cheerleading Association's leading event which draws teams from across the world.

Competing in the International L2 Junior category, the Airborn Allstars from Liverpool earned an impressive sixth place in a field of 19 teams from across the globe. 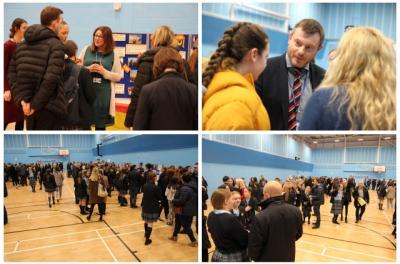 It was a pleasure to welcome Year 8 students and their parents into school this evening to learn more about the choices they have for next year.

The evening saw an informative presentation about the process, before guests entered the subject marketplace in the Sports Hall, taking the opportunity to find out more about the potential that each subject could hold for future study and what each course is really about.

Thank you to everybody who came along to this very important evening. You can find the content of the presentation here, and a copy of the options booklet here. 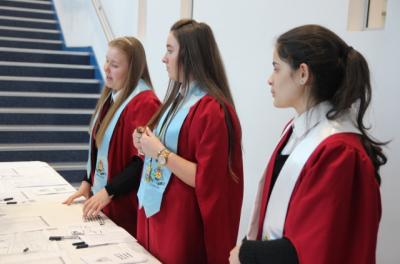 Whilst feedback on the evenings is overwhelmingly positive, about the information received and the quality of support, each time parents have complained about appointments over-running, missed appointments and parents not being able to book appointments.

No system is perfect, but we need to address the issue that parents do not always get to see the teacher they need to see on Parents Evening.

So we will trial a longer evening for Yr10 on Thursday 12 March. To facilitate this, we need to dismiss students earlier at 2.30pm.

On the day, students will have some shorter lessons, being 40 minutes instead of 50 minutes. However, they will have all their normal lessons for the day. If there is an issue with any student who is unable to go home at 2.30pm, they can remain in school until 3.15pm supervised by a member of staff.

The Yr10 Parents Evening will start at 3pm. PLEASE DO NOT ARRIVE EARLIER THAN 3PM.

Staff are entitled to a half hour break after teaching through the day, ahead of a long Parents Evening. We will not be able to accommodate parents on site before 3pm. The evening will finish promptly at 6pm, so that staff can maintain a reasonable work-life balance. We do need your co-operation with this evening, as we review our systems for Parents Evening. 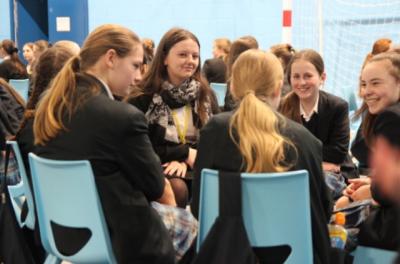 Every student in Year 7 has engaged in an empowering activity workshop today with the organisation Humanutopia.

The first phase of the ongoing project was an all day workshop called 'Who am I?' which deals with important issues around personal awareness, peer pressure and conformity. It encouraged students to reflect on their life chances, encouraging them to have high hopes and aspirations for their future.

The delivery of today's activity has helped along massively by our wonderful team of Sixth Form volunteers, who worked with small groups of students throughout the entire day.

We hope that the students found the day to be a very positive one! 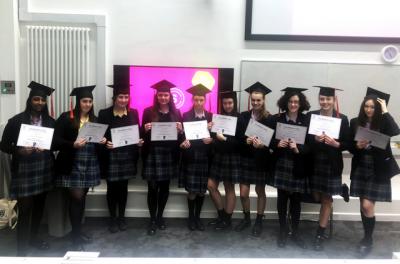 Congratulations to the latest graduates of the Brilliant Club!

The students in Years 10 and 11 earned their place at the ceremony at the University of Liverpool  following the submission of detailed assignments that they had researched alongside PhD tutors.

Congratulations to all of the students for a well deserved outcome to their hard work that will stand them in good stead for their future applications to University and the world of work. 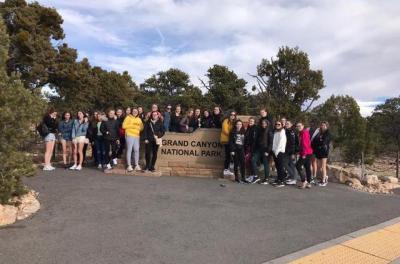 Over the February half term, 43 students set off for the trip of a life time to the West Coast of the USA.

The first stop was San Francisco, where the group began with a city tour, where they took in sites such as the Trans-America building and Union Square.  They visited the Golden Gate bridge and even had a ride on the famous San Francisco trams cars.

The afternoon was spent at Alcatraz, the famous prison on the rock.  The group departed and set off for fabulous Las Vegas!

The girls went to Planet Hollywood hotel for dinner and a spot of shopping before taking in a show at the world famous Bellagio Fountains.  There was an early departure the next morning as the Grand Canyon was on the itinerary.

A stop off at Seligman on Route 66 was made, where the group were lucky enough to visit the town that gave the Pixar movie ‘Cars’ its inspiration.

The Grand Canyon was a spectacular sight for all involved and the sheer size of it was breath-taking.  The group moved onto Los Angeles for the final destination of the trip.

A trip to Universal Studios was first on the list to meet some characters and experience Hogwarts at the Harry Potter rides. A great time was had by all and everyone managed to meet someone they knew from the movies!

The second day in LA was spent doing a tour of the city. The group started off by seeing the famous Hollywood sign, followed by a trip to Grumman’s Chinese Theatre.  This is the place where Hollywood royalty have their hand and footprints immortalised in the cement.

A walk along the boulevard allowed us all to pick out our favourite movie stars and have pictures taken with their stars on the Hollywood Walk of Fame.

It was then onto Beverly Hills, the famous city of its own within the County of Los Angeles.  We were able to see the famous Rodeo Drive and Beverly Wiltshire Hotel, the setting for some iconic movies.

The afternoon was spent at Santa Monica, a pedestrianised area along the coast, where the weather was fine and the scenery was beautiful.

The evening was spent at Jerry’s Famous Deli in Studio City, California for the final group meal.  A quick dip in the pool the following morning and a lot of packing brought the trip to an end.

A wonderful time was had by all who came on the trip and memories made that will last forever! 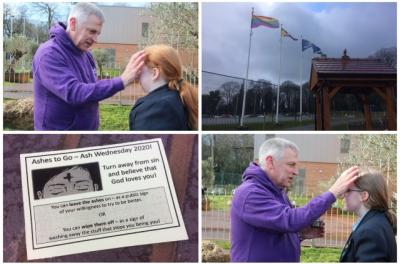 It was Ash Wednesday at St. Julie's and the first day of Lent was marked with an opportunity to receive ashes made from palm branches burnt from last year's Palm Sunday celebrations.

A two minute video (below) was shown to forms in Sacred Time setting the scene and inviting people out to the Peace Garden at break to receive ashes.

With the blustery, rainy weather it was touch and go whether this was going to happen but there was a 15 minute opening in the clouds which coincided with break and over two hundred students and staff braved the cold to receive ashes as a public sign of their willingness to turn away from sin.  They also received a card reminding them that when they wiped the ashes off, that was a sign of washing away the stuff which stops each individual being the best they can be.

By participating in this, we continued a tradition which started around 600 a.d. when the Pope was Gregory the Great who, rather appropriately, is the patron saint of students and teachers!

Thanks to all who came to the Peace Garden on this special day! 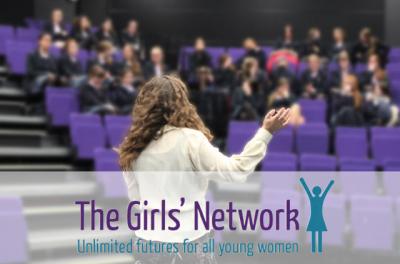 Plugging Into The Network

Some students from Year 10 spent time today learning about how to plug in to the Girls' Network.

The network is an exciting organisation that aims to inspire and empower girls by connecting them with a mentor and a network of professional female role models.

Once the students complete their year-long mentoring journey, they graduate and access membership to a lifelong ambassador programme. 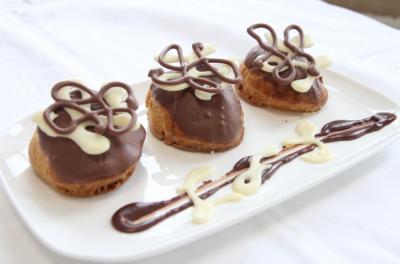 Our Year 11 Catering students have been showcasing their skills under pressure in their practical exam.

The exam runs over a single session and requires students to follow a detailed time plan that they have devised to deliver a meal prepared entirely from scratch ingredients, including bread and pastry products!

With two days out of three completed, the mouth watering results speak for themselves!